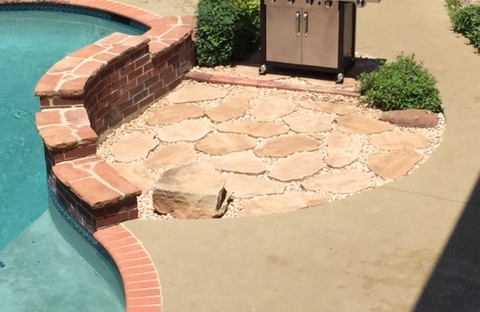 DIY (Do it Yourself) Weekend in Paradise!

After one year in our new home, my husband and I finally decided to tackle an eyesore area in our backyard that we had designated for a future BBQ grill area by our pool.  This area had been driving us crazy since we moved in and had to remove existing landscaping that included sego palms that were poisonous to our dogs.  After removing the offending sego palms we were left with this.

Huge boulders, a ton of small river rocks, and lots of dirt that created mud for the dogs to run through and bring into the house.  Plus, it’s pretty much the focal area in front of the pool, and the first thing our guests see when they come outside.  I hated it. I had been browsing Pinterest for months looking for ideas, and showing them to MSP (Mr. Sexy Pants, aka my husband for those of you who don’t follow me on Facebook), until we finally agreed on a landscaping gameplan that we both loved.

I spent a half day on weekend #1 removing all of the top layer river rocks and relocating them to another area of our backyard.  Four solid hours of digging, raking, loading into a wheel barrel, and shoveling  until the area was cleared out. This left me with a lot of dirt, and a number of half buried boulders to remove. AND a new grill to buy! Yay!

I spent another half day digging up and dislodging the half buried boulders.  As I am not Super Woman I unearthed them and left them for MSP to remove.  The largest rock weighed in at over 200 pounds.  The next morning add in one husband, and one brother and we’re ready to go.

Boulders removed, save two that we liked, and relocated to other areas in our backyard.  Then MSP had to dig up, and cap off, two existing sprinkler heads that we would no longer be needing.  Step #3 was to level out the remaining dirt in preparation for landscaping fabric, and landscaping sand to use for leveling even further.  MSP used a 10 foot long 2×4 to drag across the area with a level on top of it for measurement. 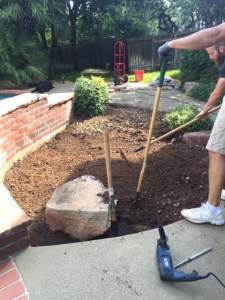 Once finished with the fabric, sand, and paving stones, we added red bricks that matched our house and pool to make a separate landing, and mark a step up area for the grill. 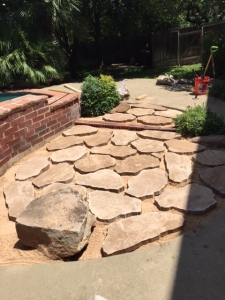 Last two steps were to pour over new river pebbles to fill in the area between the pavers, and add in the new grill. 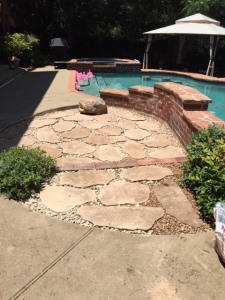 The final stage of this project took 4 1/2 hours of work by 3 people on weekend 2.  Total time: 2 weekends, and 12.5 hours. Grill purchased at Lowes.  Landscaping items purchased at Home Depot.  Total investment: Grill $499 plus tax, Landscaping items $350 and a bottle of Tylenol for some super sore muscles.  We love it, and it’s now a clean, beautiful addition to our backyard!  AND we saved probably double what we spent doing it ourselves versus hiring someone else to do it.

Let me know if you have any questions!

Published by House Cat In Paradise

I'm a House Cat, and I live in my own personal paradise. Grab a cup of coffee, and let's hang out for a bit..... View all posts by House Cat In Paradise

6 thoughts on “DIY (Do it Yourself) Weekend in Paradise!”

Join 3,524 other subscribers
Follow House Cat in Paradise on WordPress.com